Mary Kay Neumann:  A Voice For the Ocean and The Future

Special Feature in the fall 2019 issue of
The Nexus: Ocean Acidification News, Policy, and Science
​a newsletter of the Ocean Conservancy
​ 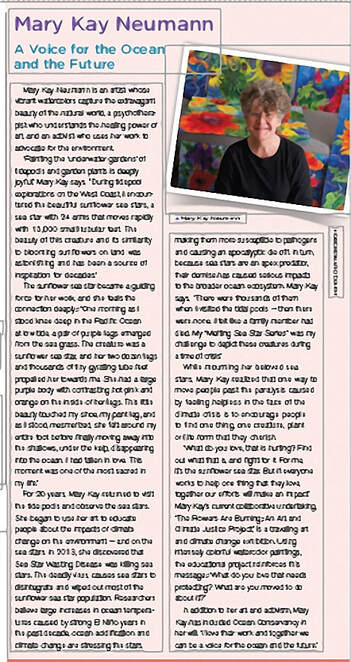 ​Mary Kay Neumann is an artist whose vibrant watercolors capture the extravagant beauty of the natural world, a psychotherapist who understands the healing power of art, and an activist who uses her work to advocate for the environment.

“Painting the ‘underwater gardens’ of tidepools and garden plants is deeply joyful,” Mary Kay says. “During tidepool explorations on the West Coast, I encoun-tered the beautiful sunflower sea stars, a sea star with 24 arms that moves rapidly with 15,000 small tubular feet. The beauty of this creature and its similarity to blooming sunflowers on land was astonishing and has been a source of inspiration for decades.”

The sunflower sea star became a guiding force for her work, and she feels the connection deeply: “One morning as I stood knee deep in the Pacific Ocean  at low tide, a pair of purple legs emerged from the sea grass. The creature was a sunflower sea star, and her two dozen legs and thousands of tiny gyrating tube feet propelled her towards me. She had a large purple body with contrasting hot pink and orange on the inside of her legs. This little beauty touched my shoe, my pant leg, and as I stood, mesmerized, she felt around my entire foot before finally moving away into the shallows, under the kelp, disappearing into the ocean. I had fallen in love. This moment was one of the most sacred in  my life.”

For 20 years, Mary Kay returned to visit the tide pools and observe the sea stars. She began to use her art to educate people about the impacts of climate change on the environment — and on the sea stars. In 2013, she discovered that Sea Star Wasting Disease was killing sea stars. The deadly virus, causes sea stars to disintegrate and wiped out most of the sunflower sea star population. Researchers believe large increases in ocean tempera-tures caused by strong El Niño years in the past decade, ocean acidification and climate change are stressing the stars, making them more susceptible to pathogens and causing an apocalyptic die off. In turn, because sea stars are an apex predator, their demise has caused serious impacts to the broader ocean ecosystem. Mary Kay says, “There were thousands of them when I visited the tidal pools — then there were none. I felt like a family member had died. My “Melting Sea Star Series” was my challenge to depict these creatures during  a time of crisis.”

While mourning her beloved sea stars, Mary Kay realized that one way to move people past the paralysis caused by feeling helpless in the face of the climate crisis is to encourage people to find one thing, one creature, plant  or life form that they cherish.
“What do you love, that is hurting? Find out what that is, and fight for it. For me,  it’s the sunflower sea star. But if everyone works to help one thing that they love, together our efforts will make an impact.” Mary Kay’s current collaborative undertaking, “The Flowers Are Burning: An Art and Climate Justice Project,” is a traveling art and climate change exhibition. Using intensely colorful watercolor paintings,  the educational project reinforces this message: “What do you love that needs protecting? What are you moved to do about it?”
​
In addition to her art and activism, Mary Kay has included Ocean Conservancy in her will. “I love their work and together we